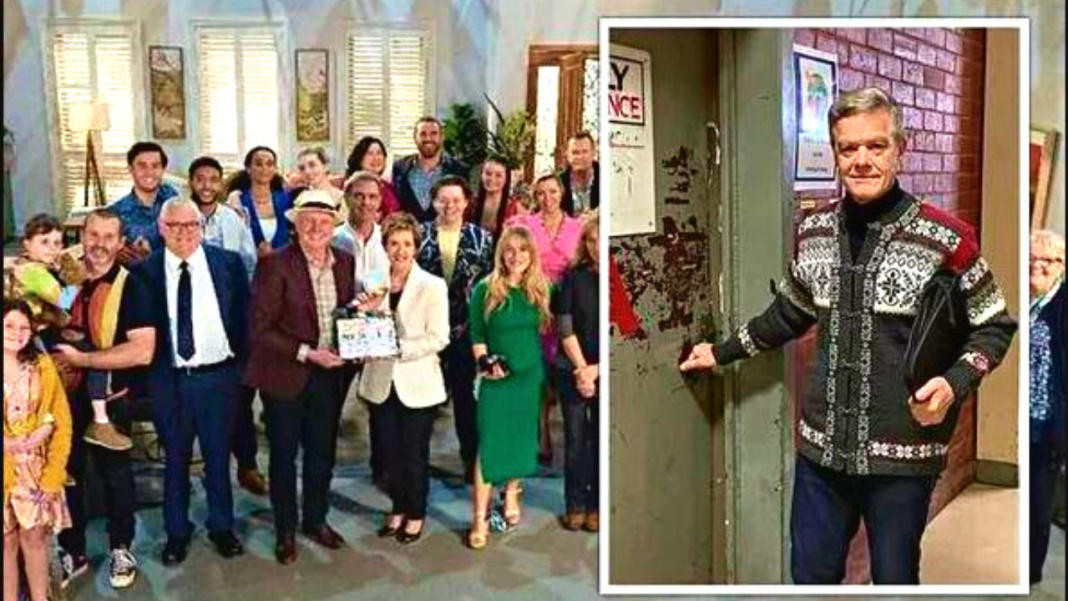 After production for the Australian soap NEIGHBOURS came to an end on Friday, the show’s producers shared a parting snapshot of the actors.

The actors of Neighbours filmed the final ever scene for the soap on Friday, ahead of the series finale in August. To commemorate the conclusion of the nearly four-decade-long soap, a photo of Ramsay Street stars on the set of the Kennedys’ home was published on social media. Hundreds of admirers sent comments on the photo, expressing their sadness at the end of the show.

Executive producer Jason Herbison said: “We all knew this day was coming but until we were here in this moment when the very last scene was filmed, it was hard to express how we would all feel.

“Of course, it is sad and tears were shed, but we’re also enormously proud.”

He went on to say that having the soap on the air for 37 years was a “great feat” that should be lauded.

Jason went on to say: “The response from our viewers all over the world has also been really moving.

“Neighbours is more than a TV show to many people.

“They see us as part of the family and we feel privileged to have been invited into their homes, and I know the legacy of Neighbours will live on for many years.”

After the photo was uploaded on the Neighbours page, fans went to Twitter to express their opinions.

Neil Flaherty commented: “Going to miss this soap. @channel5_tv say they want to continue making programmes in Australia but they are letting a legend of a show slip from their grasp.”

Caroline Hall added: “My guilty pleasure! You’ve all been marvellous and I’m so sad to see this glorious production come to an end.

“Thanks for all the laughs, tears and cringes, it’s been an absolute blast. I wish you all every happiness and success in whatever comes next. I will miss you all, even Paul!” (sic)

Su Mace penned: “Watched it from the start, it’s the only soap I ever watch. I am gutted. Good luck to everyone and thank you for the memories.”

Ben Bone remarked: “There are no words to describe how I feel right now. But my heart is full of love for each and every one of you for creating a show that has been with me my entire life. Thank you for everything.”

Sarah Lea said: “Truly gutted by this. Will never stop hoping that another broadcaster sees the amazing value in this show. Personally, thank you for the way you’ve handled sensitive issues, especially Susan’s MS which actually helped me come to terms with my own diagnosis. You’ll be missed.” (sic)

Patrick Moore added: “Everyone can stand back and be proud of the contribution they made to the series and the enjoyment it gave to so many worldwide – it won’t be forgotten.”

On August 1, the long-running Australian soap will air its farewell episode.

In March, Channel 5 opted not to renew its contract with production company Fremantle, resulting in the cancellation of Neighbours.

Fremantle claimed it was unable to find ‘alternative finance’ for the series.

A statement from the production company read: “The show has brought a sunny slice of Australia into the homes of millions of viewers around the world launching the careers of dozens of household names along the way.”