Home and Away Season Return airs outcome of dramatic crash 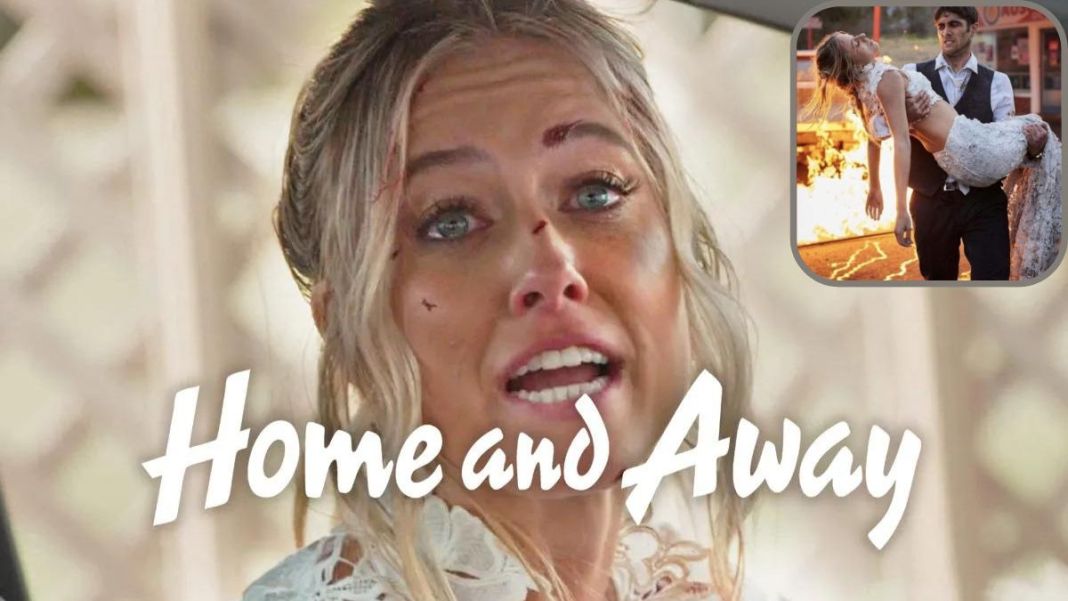 Home and Away’s return to Australian screens saw Felicity, Eden and Leah with their lives on the line after two dramatic crashes. Did everyone survive the eventful 2023 season return?

After 6 weeks off the air, Home and Away is finally back on Australian screens, starting with a dramatic episode which left the fate of Felicity (Jacqui Purvis), Eden (Stephanie Panozzo) and Leah (Ada Nicodemou) up in the air.

Flick and Eden were unaware that a member of the Death Adders bikie gang had tampered with their brakes when they were driving to Felicity’s wedding to Tane (Ethan Browne) at a secluded country farm in the final minutes of the 2022 season finale, which aired in Australia at the end of November.

After Cash shot their leader Marty (Ben Wood) last year, the gang put a bounty on his head, but they had been hiding out lately. The newly restored ute that Cash (Nicholas Cartwright) was going to use to transport his sister to her wedding was tampered with the night before Felicity’s wedding by an enigmatic stranger who crept onto the Paratas’ driveway.

As had been previewed multiple times over the past few months, the pair jumped in their car to head back to Summer Bay, where they soon found themselves on a collision course with Flick and Eden.

While Eden drove quickly to make up for lost time, Felicity passed the time by practicing her vows.

Eden tried to slow down as she neared an orange campervan but found that the ute’s brakes had failed. She and Felicity were headed straight for Justin and Leah’s car when she swerved past the van and into the opposite lane.

In order to avoid hitting them, Justin swerved, tipping his and Leah’s vehicle, which then fell to the ground.

After speeding recklessly for a few more meters, Flick and Eden’s automobile crashed through the wall of a service station and came to a stop perilously close to the gas pumps.

At the wedding venue, Tane’s nerves built as he awaited Felicity’s arrival. Felicity was late – hardly unusual – but as time ticked on, it eventually became clear that the bride-to-be wouldn’t be arriving for her wedding.

Only Cash and Gary (Peter Phelps) knew that Felicity had been having major doubts the night before the wedding, to the point of wanting to call it off.

Cash put off the wedding party’s realization that Flick was late by explaining to Nikau (Kawakawa Fox-Reo) that there was a risk she would not show up at all because of an issue with her wedding attire.

Cash eventually concluded Eden had been unsuccessful in getting Flick to agree to the wedding, and he was left with the painful responsibility of telling Tane that Flick wouldn’t be attending.

After their collision, Justin and Leah were in terrible shape. When Justin regained consciousness, he glanced to his left and noticed Leah suffocating next to him and a metal pole visible through the windscreen. Leah required assistance right away since the pole had pierced her abdomen when the car landed.

He was able to call 000, and soon the ambos and police were on their way.

Justin drove her to the hospital when they were able to cut the pole, stabilize her, and get her into an ambulance.

While Rose (Kirsty Marillier) organized everything, Xander (Luke Van Os) did his utmost to assist by placing a neck brace over Eden and assuring Flick that they would get her out.

When Tane returned to the location to cancel the wedding, Gary rushed in to say there had been an accident.

The medical team had to free Felicity and Eden because the firefighters were en route to another crisis and were unable to help.

The team decided it was okay to start cutting because there were no signs of a fuel leak, so they cut Eden out of the car while she was still asleep. During the rescue, she experienced full cardiac arrest, was not breathing, and the situation didn’t seem promising.

Cash went with Eden to Northern Districts, but only after telling the paramedics that she was his girlfriend. It looks like the crash has made him realise his true feelings, just as he risks losing her for good.

The calamity was beginning to become known to the remaining citizens of Summer Bay. Back at the Diner, Maz dumped the wedding cake—the incident that led to Leah and Justin’s involvement in the collision—into the trash.

John (Shane Withington) was left comforting Nikau at the Parata residence since he was unsure of what to do.

The episode also saw one of the gang members watching Cash beat Justin while he was being treated at Northern Districts Hospital, blaming Justin for the accident’s delayed brakes. The gang member was on the phone with someone, most likely Tex, giving them an update on the situation.

As he witnessed Cash attack Justin, he said, “He clearly wasn’t in the car.” “I’m staring at him right now, and he’s unblemished. Regroup and implement Plan B.

The team realized they couldn’t get Felicity out of the car from the driver side, where they had managed to rescue Eden, once they got back to the accident scene.

The fuel tank ruptured as they closed the driver’s door, and gasoline started to seep out the ute’s bottom.

A doctor shared her worries about Felicity and informed Gary that Flick had been confined with her legs squeezed for a longer period of time than they would have preferred.

She said that there was a chance that poisons would enter her body if they eventually freed her, which may cause her heart to stop.

The medical professionals escorted everyone away from the vehicle after spotting the petrol spill.

Felicity was instructed to stop moving, but she began to freak out and tried to ram the ute’s door open on her own.

This caused the pickup to bounce back and forth, which prompted a stray spark to light the gasoline that had been spilled, igniting it and engulfing the ute in flames with Felicity still inside!

Tane was left to attempt to save his fiancée from the flaming car because the fire department was still nowhere to be found.

He went through the flames, placing his own life in danger, wearing only his suit jacket as protection.

The dramatic episode ended with us wondering whether Felicity, Eden or Tane would make it.

Do Tane and Felicity survive?

Thankfully, with the flames confined to the outside of the vehicle, Felicity survives the explosion, and it seems running through fire doesn’t have much of an impact on Tane either.

Photos of the aftermath of the crash show Tane carrying Felicity in his arms away from the vehicle.

Jacqui Purvis and Ethan Browne have both been spotted filming together recently, demonstrating that Flick makes a full recovery and it unquestionably seems like the two are still together.

It remains to be seen if they exchange vows or if the incident makes Felicity reconsider marriage once more.

As far as we know, Stephanie Panozzo is still filming for Home and Away, meaning Eden also survives the accident.

We’ll have to wait and see how she heals from the spectacular collision, since the doctors appear to be worried that she might have sustained a lasting disability in the preview for tomorrow’s episode.

Thankfully, we know that Leah makes a full recovery, as actress Ada Nicodemou has been seen filming with fellow Home and Away cast members in recent weeks.

In early November 2022, a number of the cast headed to central Sydney, filming scenes at a beautiful location with views of the Opera House and Harbour Bridge.

Everyone is dressed in formal wear, and Justin and Theo are dressed in suits and boots, so it appears that later this year, we may expect something grandiose, such as a wedding, celebration, presentation, or something else else.

Justin plans to take responsibility for the accident in the following days.

Cash wanted Justin to revive the ute before the wedding because it used to belong to Felicity and Cash’s father and hadn’t been used in decades. Justin can only conclude that he botched the repair and is to blame for Flick, Eden, and Leah’s injuries since the brakes failed on the newly fixed car’s first official outing.

But it appears that the moment when the truth is revealed will come quickly. The bikie gang will undoubtedly attempt Cash’s life again soon since he is still alive.

The episodes of the following week begin with “Cash uncovering a frightening reality” (perhaps realizing that he was the target of the modified brakes), followed by “following a lead” on Tuesday and “launching a rogue crusade” on Wednesday.

Will he get to the gang before they get to him?

Home and Away airs Monday–Thursday on 7 and 7Plus.

The Home and Away 2023 season return will air in the UK on Monday 9th March.