Kate Ritchie enjoys breakfast in Noosa with her daughter Mae, eight, and her Home and Away co-star Ray Meagher – as fans say they look like Alf and Sally 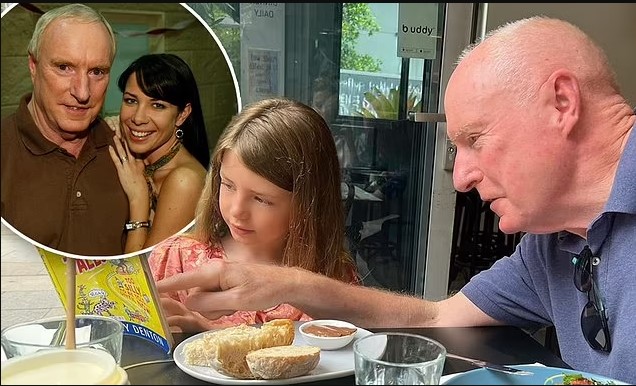 When Kate Ritchie, her lookalike daughter Mae, and her former co-star Ray Meagher went out for breakfast in Noosa on Saturday, longtime fans of Home and Away did a double take.

She shared a picture of Ray, who has portrayed Alf Stewart on the Australian soap since 1988, reading a picture book to Mae, 8, while they were sitting at a table outside.

Regarding Kate’s character Sally Fletcher, who first appeared on the show as a little child, Kate’s fans remarked that the shot was exactly like seeing “Alf and Sally” from Home and Away.

The 44-year-old mother of one captioned the photo, “Breakfast with these two wonderful humans was just splendid.”

Many of Kate’s fans noted that Mae is almost the same age as Kate was when she first made her appearance on Australian television, and that Ray being next to her reminded them of an old Home and Away episode.

“How fantastic! Ray gets to share in Mae’s life as well. What a blessing,” a supporter remarked.

Another person said, “Home and Away hasn’t been the same without Sally Fletcher.”

A admirer described the image as being “like a time warp backwards.”

Another person shouted, “Alf and Sally!” Imagine dining at the same cafe as this, said another reply. You would be thinking, “Holy hell, Sally and Alf are over there!”

When Kate spent time in a rehab facility late last year to address her alcoholism, she appeared to be in a much better position.

Earlier this week, she posted on social media to reassure her fans that she was “doing well” and will return to her Nova FM radio show in a few weeks.

Before it was made public that Kate was receiving treatment, she had already declared in October that she would be leaving the Kate, Tim, and Joel show.

During her absence, Ricki-Lee Coulter has been filling in.